Skip to content
You are here:
Estimated reading time: 5 min

Although the Sport edition of the Crown Victoria is often the most sought-after of the non-Marauder Panthers, many do not realize that in fact the P71 / Police Interceptor comes with significantly more enhancements over the standard platform. Most of these improvements enhance the vehicles reliability, durability, and ability for sustained-performance. One of these P71 model specific improvements is the use of a better balanced and lighter-weight driveshaft. This technical article will briefly explain the components needed to properly swap the driveshaft into your civilian (meaning P73/P74) Crown Victoria, Grand Marquis, and Lincoln Town Car.

BENEFITS OF THE SWAP:

Ford introduced the aluminum driveshaft in the P71 model at the beginning of the 1993 model year and continued its use through the remainder of the Panther production in 2011. Some of the benefits of the aluminum driveshaft versus the standard steel driveshaft include:
– Less rotating mass, reduces drag on entire rotating assembly which leads to improved fuel economy and acceleration.
– Reduced weight, approximately 9-10 pounds less.
– Improved balance, improves engine / drivetrain harmonics which is necessary for gearing over 3.27:1.
– More rigid and less flex which improves handling characteristics under varying speeds and acceleration.
– A higher and more sustainable top vehicle speed (see chart for specifics).
– Aesthetics, the aluminum driveshaft won’t rust like the steel one does!

There are two options for swapping a P71 driveshaft into a non-P71 vehicle. The first includes physically swapping over all the applicable parts mentioned in the section above. While this would ultimately be the most correct method for performing the swap, it is unequivocally the most labor intensive due to the fact that it requires the removal of the input shaft from the transmission as well as the tailshaft housing which supports the transmission to the vehicle’s frame. An easier and equally beneficial solution is through a combination of aftermarket and P71/P7X parts. Also note, any aluminum driveshaft from a panther will work in a Crown Victoria or Grand Marquis, as long as they are not from an extended wheelbase model; however, there were some significant changes made to the 2011 model year which makes some of the components incompatible if going with the first swap option. The parts list to swap an aluminum driveshaft into a non-P71 vehicle includes:

The assembled P71 driveshaft installed on a P73/P74 should look like this: 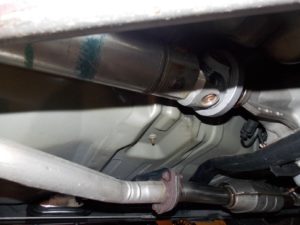 PLEASE NOTE! If you are NOT using the P71 input shaft and longer tailshaft for the swap into your P73/P74, then you MUST use the spacer (available from ADTR) and the P73/P74 yoke. Swapping the driveshaft without the use of these components may result in catastrophic failure of the driveshaft through damage to the driveshaft yoke and / or the input shaft.

As shown in the VIDEO earlier, the internal grooved mating surface of the splines in the P71 driveshaft yoke is significantly shorter than the grooved mating splines on the P73/P74 yoke. Because the P71 driveshaft is effectively shorter, at certain limits of suspension travel the driveshaft may become dislodged from the splines allowing the ends of mating surface to become worn and stripped. Additionally, high horsepower applications will want to make use of the additional mating surface of the civilian P73/P74 yoke as it can withstand greater tension than a P71 yoke in a civilian car without the spacer and shorter input/tail shaft. In the images below, the green spline area indicates positive contact patch, while the yellow spline area represents no contact patch. 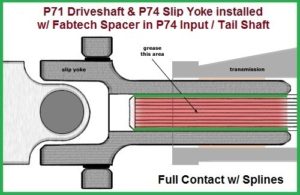 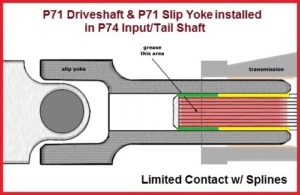 In short, using the civilian P73/P74 driveshaft yoke AND the driveshaft spacer with the P71 driveshaft in a civilian car will maintain the driveshaft throw for proper suspension travel and maximum durability and reliability. Note: if you do decide to swap the input shaft and tail shaft make sure you properly match vehicle generations. 2003+ vehicles DO NOT have the hole for the VSS sensor. If you get a 03+ tailshaft housing and try to use it on a 98-02 Panther, it will not work. In turn, 2003+ cars DO NOT use a VSS sensor so 98-02 tailshaft housings will not work on 03+ vehicles either.

Near the mid-point of the 1999 model year production, Ford introduced the Metal Matrix Composite (MMC/MMX) driveshaft. This driveshaft was only equipped on the 1999-2000 model years, with many of the earlier 1999 models, and some early 2001 models receiving the MMC driveshaft as part of a TSB / recall service. The original part number for this driveshaft was “XW7Z-4602-AA.” What makes the MMC driveshaft unique is that it far exceeds the performance potential of the basic P71 / Marauder aluminum driveshaft due to its unique composite. This composite is a special blend of aluminum and steel that Alcoa manufactured which is 30% STRONGER than the aluminum-only driveshaft. In addition MMC’s elasticity is nearly 1.5 times that of 6061 aluminum, this allows the MMC driveshaft to absorb more drive-line vibrations, there-by producing a better balance at higher speeds. The unique composition also allows the shaft to absorb shaft “twist” much better than the steel or basic aluminum driveshaft, making it ideal for high performance applications. More specifically the elasticity of the MMC is 14.1 million pounds per squared inch while the density is .106 pounds an inch^3. Likewise, aluminum elasticity is 10 million pounds/inch^2 and .098 density. 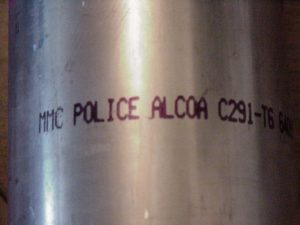 Looking at the cross-section of the driveshaft in the image below, the inside is lined with a perfectly sized piece of looped and layered cardboard. Although not confirmed, it is thought that this piece of cardboard helps reduce some of the driveline harmonics by attempting to absorb any resonance within the hollow driveshaft. 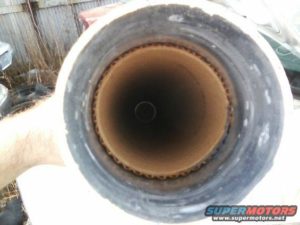 Note: An MMC/MMX driveshaft can be identified by one of a few different ways based on feedback from several CrownVic.net members:
– MMC/MMX has pink and green stripes running around the shaft while all others have pink/blue/orange stripes.
– Large letters “POLICE” with small black print with the letters “MMC” 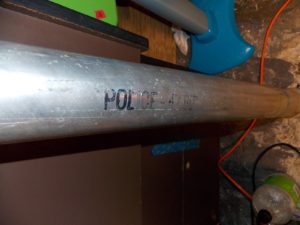 In addition to improving the performance of your Crown Victoria or Grand Marquis, it is also important to understand the risks of a failing driveshaft. To improve the safety of the vehicle, and to reduce injury or damage to yourself and the vehicle’s floor pan and components, it is highly recommended that a driveshaft safety-loop be installed. Metco offers a simple driveshaft safety loop that surrounds the area where the driveshaft connects to the tailshaft housing. In the event that the driveshaft, U-joint, or slip-yoke fails, this safety-loop will prevent the driveshaft from flailing wildly and possibly tearing open the floor pan. This safety-loop requires no modification to the frame and simply bolts into the underside of the front inner-most front seat bracket bolts. 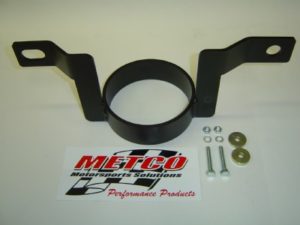