This will show installation of an ARP watts link stud on Jim Leonard’s 2008 Crown Victoria Police Interceptor.  The installation on this car is identical to all 1998+ Crown Victorias, Grand Marquis, Marauders and Town Cars.  This car already has the updated watts links arms. (Thanks to Jim for the great pics!)

First step is to lift the rear of the vehicle to gain access.  Lift at the rear pumpkin and put the jack stands under each end of the axle.  The tires do not need to be removed.  Once properly lifted, loosen the bolts on the Watts links at the center pivot and swing the arms out of the way using any 18mm wrench or socket combination. (Removal of the watts links off center pivot)

The hard part is loosening the center pivot nut. Use the 24 mm socket (or 15/16 which is more readily available in most toolboxes) and remove the nut.  Many times the stud comes with the nut so I suggest a crescent wrench to hold the stud at the rear end housing.  Remove all the nuts and keep them on a magnetic dish. 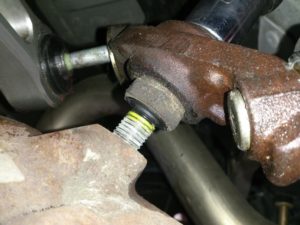 Take the new ARP stud and apply blue Loctite on the threads.  Screw it into the rear diff and tighten.  You can use the 30mm socket and torque to spec. 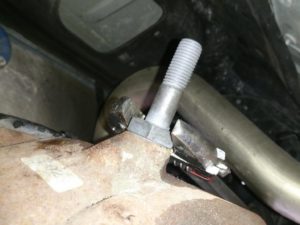 Place the original pivot on the new ARP stud and make sure that it faces front as marked on the casting. 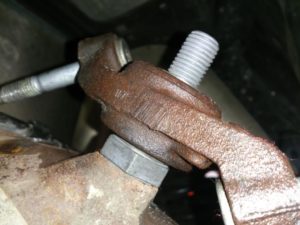 Position the Watts link arms back in place and put the nylock nuts on loosely. Check to make sure all arms are installed correctly and the pivot is aligned correctly.  Once confirmed, tighten all the fasteners and torque to factory specs: 199 ft/lb for the stud and 184 ft/lb for the nut.